It’s a complex conversation; and one that I have experienced personally. Let me tell you about a time when I faced this question – who has control, the individual or the workplace?

In my earlier career as a business analyst, I worked for a boss that was, frankly, a nightmare. In a small team of very smart people who were tasked with deciding on the IT platform and systems to support a whole number of business changes, she was massively controlling, and it caused great stress amongst us all.

She would micro-manage, insist on her ways of doing things, lay down a workload that was out of kilter with our capacity, and give difficult feedback almost weekly.

Our voices weren’t really heard, even though we – and I in particular – represented the business’s voice in understanding its day-to-day operations and what was essential to systemise.

My other two colleagues and I were tearing our hair out.

Culturally, we were operating in a very different set of assumptions than my boss was. We were British, she was American. And the long-hours, always-on culture (and I do mean, always) was not part of what we thought was right or good.

Nor was it being checked by the boss’s boss; we just had to get on and deal with it.

A very tough gig. Her three direct reports, ( I was one of these), suffered as a result.

The long hours took their toll on my energy.  The never-ending feeling that we couldn’t do things right took its toll on our work satisfaction and confidence. The real underlying issue, however, was more profound than all of this – the absolute lack of autonomy or influence on decision-making.

Fair enough to consider these in our evaluation, but not to skew the evaluations to give these as the only ‘right’ answer.

In the middle of all this, my colleagues and I decided that the stress levels were unacceptable.

What to do about this?

We also didn’t have a lot of hope for change, given we each had tried individually to shift things. And talking to her about it was a complete failure; no understanding, no real listening.

Instead, we decided to team up and set up a series of experiments to see if we could change the behaviour. Thus we learnt:

To finish the day:

We could say, ‘I’m going home now’ – because we all did it simultaneously. It helped enormously to set common boundaries; somehow, the boss was taken off guard because of our consistency. After a few weeks, our exit time from the office was never mentioned again.

Initially, we never disagreed solely in front of her, we always went in with at least another team member.  Once she got used to us not following everything she said to do/decide, it became easier to disagree alone.

How to Pop the Stress Bubble:

By sharing, we often felt the burden lifting and gained an honest perspective. Whilst being a bit rigid in the ‘right/wrong’, one of my colleagues also had a brilliant sense of humour. Boy, did that count when we discussed our daily or weekly ‘5-minute moan’ (reference Monty Python!)

How to keep it!  We limited our time moaning, instead turning it into either action or walking away (in our minds) from the situation.  We helped one another stick to these ground rules. It helped shift our energy towards the positive. In the end, I cannot say we weren’t glad when the boss left to go back to America!

But we had helped ourselves to go beyond just putting up with things, we lifted ourselves out of ‘coping’ towards a Resilience level of ‘Bounceback’.

In this, we learnt a lot about our personal values and judgement, what it was like to join together in the face of difficulty, and about assertiveness. Who, in the end, was the cause of the stress? The boss? The organisation for not spotting what was going on? Each of us?  The answer is all of the above!

The boss or organisational culture often triggers stress-inducing behaviours, but it doesn’t end with just that; we each have a choice over how we behave and respond.

In this situation, we owned our reaction and recognised that whilst the behaviour was challenging, we could either be a victim or at least try to shift it.

The latter became easier by accepting that we couldn’t change our boss or the organisation, and by acting on a shared commitment to take responsibility for the parts we could change, including what we could influence. These were invaluable work lessons!

What have you learnt about the lines between the workplace versus yourself on stress-inducing behaviours?

When do you find yourself giving up on the idea of change being possible? Who else might offer a different perspective?

Suppose you consider your situation in terms of maintaining a healthy working life.

Where would you draw the lines of responsibility between your organisation’s culture, and your boss’s needs (e.g. for control), versus your responsibility?

When is the last time you really laughed? Think about it. Do you seek out ways to get a laugh? Or are you just keeping it together, often feeling tired, perhaps distracted because of work...

END_OF_DOCUMENT_TOKEN_TO_BE_REPLACED 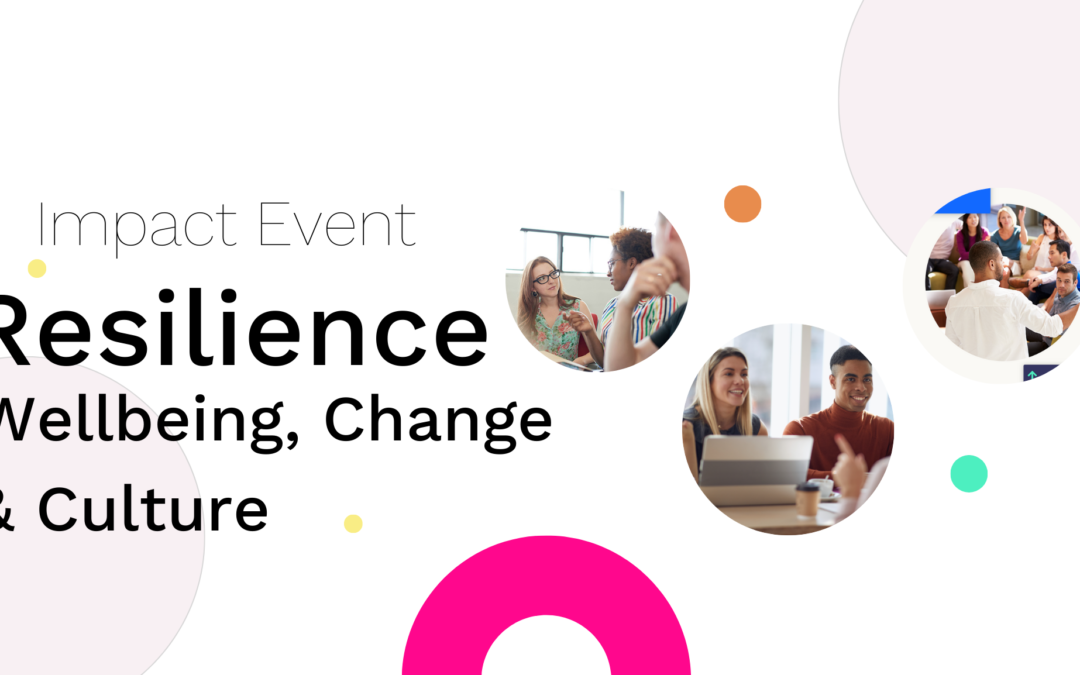 Our series of Impact webinar events covered the three enablers of Resilience; wellbeing, change and culture. In this blog article, we will share with you the critical takeaways from the Change session and video links to watch again.

END_OF_DOCUMENT_TOKEN_TO_BE_REPLACED

By continuing to use the site, you agree to the use of cookies. more information